2020 U.S. Open Flyover: Eighteenth At Winged Foot, The Putt That Changed Golf History And The Restoration 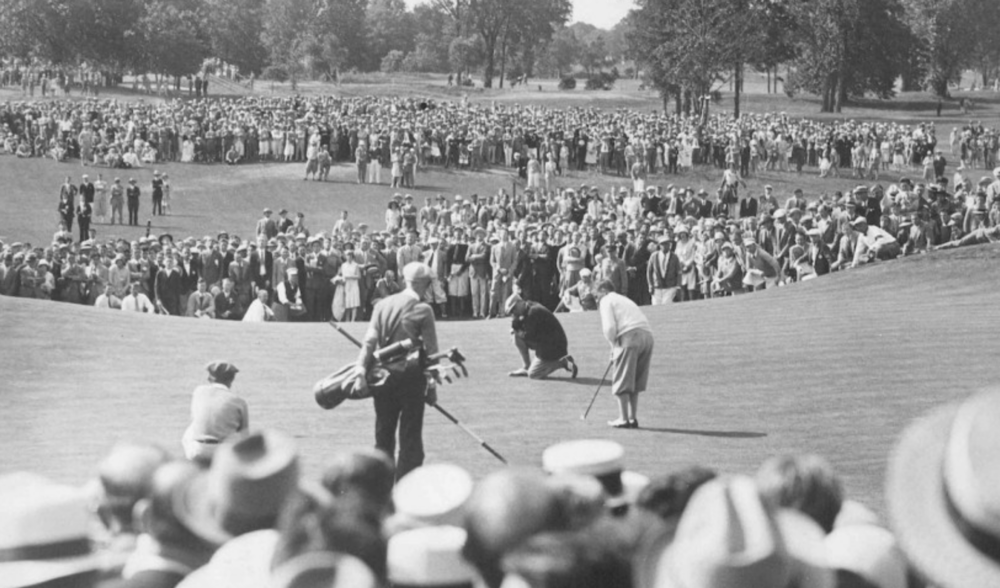 If you’ve watched early week coverage from Winged Foot, you know the 18th green just has something special going on. I don’t recall that sense the last time the West hosted in 2006. So we’ll chalk up that eye-catching quality to the restoration work reclaiming both shape, size and artistic flair to this historic location.

John Fischer takes us back to the putt that changed golf history and forced a 1929 U.S. Open playoff. Carve out a few minutes to go back to his moment, which now is easier to visuale in 2020 thanks to the green reclaiming its identical look.

The 12-foot putt that Jones faced on the 72nd hole was downhill on a fast green, with a left-to-right break. Jones took a few extra seconds to look over the putt. The gallery had swelled to 7,000, some standing back as far as the knoll in the 18th fairway to get a good view of the green.

Jones decided on his line and aimed 1½ feet above the cup. He stroked the ball amid dead silence from the huge crowd. The ball slowly rolled down the slope and seemed to hesitate at the edge of the cup. The gallery let out a collective gasp. Then, after seeming to hang on the lip, the ball fell into the cup. Thunderous cheering and applause followed. Jones had done it. He had tied Espinosa.

If you want to keep going back, why not get a little Grantland Rice in your life. His dispatch well after that day and one of the last things he authored.

The last flyover provided by the USGA and Deloitte to whet our 2020 U.S. Open appetite shows the 469 yarder seemingly discouraging driver off the tee due to the sharp bend left. Then again who knows in this wacky world of totally natural physique overhauls.

A good tee shot sets up a short-iron second to the masterful green, with its false front, roles, swales and difficulty. The 18th presents elements we’re not used to seeing: fairway bunker on the outside of the dogleg, and a seemingly left-to-right second where the greenside bunkering is on the outside left. A grass wall guards the right where you’d normally expect sand.

Hit pause on the flyover to soak up the green and imagined where the holes might be cut. There are some new beauties since the last time the tournament visited Winged Foot.

Original link
Tweet
NY Times: "No Fans at the U.S. Open Changes Golf’s...
Meet the troubadour behind "Phil Out Loud" and gol...